The study was conducted in an urban school district with 43,000 students. Four elementary schools were selected. One school implemented the Standards Plus materials as the experimental treatment and three did not. All schools in the experiment had over 700 students. The schools were selected based on academic and demographic criteria. To ensure consistent and strictly compliant implementation, district office staff monitored and managed the Standards Plus implementation in the treatment school. All schools in the study, including the treatment school, employed the district’s adopted curriculum.  All schools in the experiment, including the treatment school, were closely monitored by district staff to ensure they complied with all district policies and school improvement measures.

Schools in the experiment were matched for comparison in two ways. One criterion was performance on the state’s yearly achievement test across all schools. The other criterion was determined by demographics.

The state established a one to ten scale for two comparison criteria. Schools were assigned two scores on a one to ten scale. On the first comparison, a score of One identified schools in the lowest 10% of all schools based on statewide test scores. The other one to ten score was based on similar school demographics. All state schools were divided into ten comparison groups according to demographics (English Learner percentage, average parent education, percent of students participating in free/reduced-price meals, etc.). Each school was assigned to a similar schools group. Thus, a second score of One indicated a score in the lowest 10% among the schools with similar demographics.

For this experiment, Standards Plus implementation outcomes were determined by the state’s designated school score. The state established a performance target. The growth target for each school was based on the school’s distance from the state’s performance target.   Schools were designated to be underperforming if they scored below the state target. The state required schools to improve their performance each year by a percentage of the difference between their school score and the state’s target. For example, a school with a low school score would have a large growth target. A school with a higher score would have a lower growth target. Schools with very high sores did not have a state assign growth target because the exceeded their achievement target.

The Federal Government accepted the state’s system as a valid measure for school success. The district applied the state established school scores as valid and reliable growth indicators for each school and to consequently determine the successful outcome of the Standards Plus implementation. 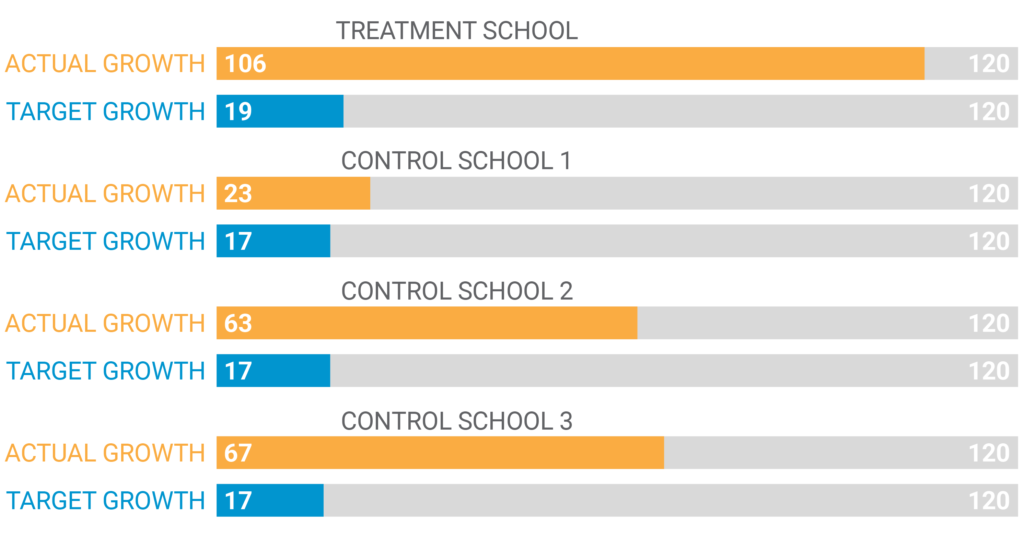 The table shows the state determined growth targets for each school and each school’s actual growth. All schools met their growth targets. The district was working under an improvement mandate and initiated multiple school improvement efforts. The district attributes the success of all the schools in the experiment to this circumstance. All the schools including the Treatment School implemented all the district initiatives and were closely monitored to ensure compliance. The Treatment School also implemented Standards Plus. The purpose of this experiment was to determine if the Standards Plus implementation led to a significantly different outcome than the Control Schools that did not implement Standards Plus. Analysis revealed that the Treatment School’s growth was significantly different than the Control Schools’ growth. 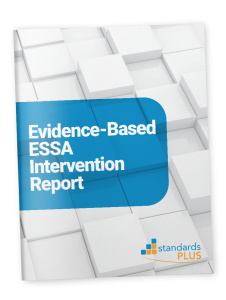 Download a PDF of the Report
© 2022 All rights reserved. Learning Plus Associates